During one week, 8 students of different nationalities worked together in the construction of tile vaults in Cottbus (Germany).

Tile vaults are built without centering, with one or more layers of thin bricks, placed “flat”, joined together along their edge. During the construction, stability is achieved by using plaster mortar (containing gypsum), which sets in a short amount of time. The advantages of this technique are the savings in auxiliary means, its light weight, which results in the reduction of thrust and necessary buttressing system, and a faster rate of construction.

The aim of the workshop was to become familiar with this traditional technique, born and mainly employed in the Mediterranean area but spread around the world. There are wonderful and interesting examples in these vaults by Rafael Guastavino in America, or those used in the reconstruction of Munich by the Rank Building Company, studied by professor Dr. Santiago Huerta. It is a very simple and economical technique that has been revitalized over the last few years for intervention in old buildings, but also for the construction of new structures, especially in developing countries. 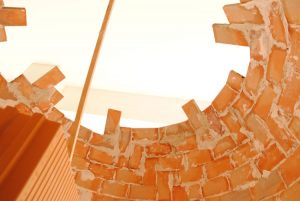 The workshop was organized by  Paula Fuentes (post-doc at the DFG -Research Training Group 1913 “Cultural and Technological Significance of Historic Buildings” at BTU Cottbus–Senftenberg, with affiliation to the Chair Construction History and Structural Preservation). It took place from the 11th to 15th of June 2018. It was conducted by Paula Fuentes (BTU) and Ignacio Javier Gil Crespo (Fundación Cárdenas, Centro de Estudios José Joaquín de Mora, Spain) and the master mason Carlos Martín Jiménez (CREA, Spain). Dr. Ing. David Wendland contributed with a spontaneous and very interesting lecture about Gothic construction. A total of 9 students participated in the workshop: 8 from the Master of Architecture and one from Civil Engineering (Diego Wallis Hiller, Allie Huber, Federico Webe Ireill, Giancarlo Urpi Garita, Huani Quintanilha Felinto, Linh Pham, Samuel Jonas Heurtebize, Sherezade Requena Juárez and Sollane Coelhode Vilhena Dias). Besides the practical work, some lectures provided the theoretical framework to understand the importance of this technique, the history of tile vaults and the structural behaviour of arches and vaults. The students also presented a research work on different topics around vaults without centering. 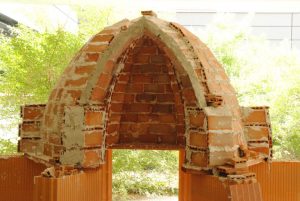 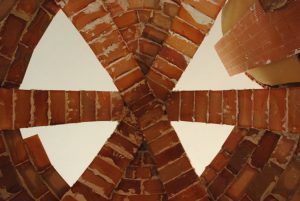 On the construction site, the basic materials were tiles (thin ceramic bricks) and gypsum (for the mortar). Participants started with the construction of three small arches with different profiles (all 1 m span and 5 cm thick) in order to get familiar with materials and technique. In the following days, two big vaults were built: a semi-spherical dome and a gothic vault with three pointed arches. They had 2 meters diameter and were supported by six pillars. The vaults were completed in three and a half days by the students. They were able to organize themselves in all the activities of the work: carrying the material, preparation of the mortar, taking decisions about the construction problems, setting the tiles according to the bonding and even cleaning the work area each afternoon.

As part of the program, the arches and the vaults were tested to collapse, demonstrating the strength of these structures. During the tests in the arches it was possible to recognise the theoretical collapse forming a four-hinge mechanism.

Students faced the problems of real construction, learnt the theory and practice of a traditional technique and explored possible applications to contemporary  construction.

More information and photos in: